Americans with Disabilities Act (ADA) Transition Plan
In July 2006, the City of Dublin's Public Works Department began working on a project that involves an updated inventory of curb ramps and driveways located throughout the City.

Improving Access to City Facilities & Public Rights of Way
The Americans with Disabilities Act (ADA) Transition Plan Update involves identifying improvements needed to City facilities and public rights-of-way in order to comply with current ADA standards. The ADA Transition Plan Update involves a public outreach program, in which the City hopes to gain information that will help identify existing areas of concern. Needed improvement will be prioritized based on a combination of the volume, type of use the facility sees, path of access between public facilities, and the severity of the issue.

Contact Us & Submit Your ADA Compliant Concerns
The City of Dublin would like to give the community the opportunity to present any concerns it might have about accessible access to various facilities. The City intends to use this information in its efforts to prioritize where improvements to the public right-of-way are most needed.

For more information or to discuss concerns, please contact the Engineering Division of Public Works at 925-833-6630. 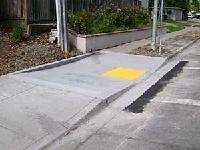