5 average based on 2 votes

There are no public restroom facilities at the park.

In 2020, "Dog of Dublin," an art installation piece by Tellart Studios and lead artist Emily Leighton was installed.  Tellart Studios is located in Berkeley, California. 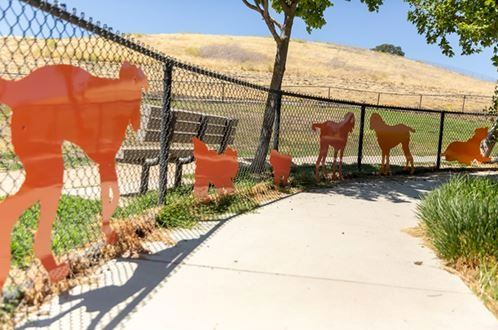 "Dogs of Dublin" is a series of brightly colored silhouettes of dogs, following an ombre pattern inspired by the colors seen at dusk over the park's nearby hills. Eighty (80) silhouettes line almost 500 feet of fence line along Amador Valley Boulevard.

These silhouettes were created from a pet photo shoot held at the dog park, and are replicas of neighborhood dogs.

The park previously contained an art installation called "Animal Series" by artist Michele Alcantara of Salinas. In 2017, this piece was decommissioned.